I’ve frequently encountered the idea of fusing Jive and Tango, combining the discipline and style of Tango with the expressiveness and flexibility of Modern Jive. Fusions are also sometimes touted as an easy route from Jive to Tango, introducing hybrid movements based on existing patterns that students are familiar with.

And ultimately all dance forms are fusions of movements, technique and music. So it’s clearly not impossible.

So let’s look at the biggest and most disciplined effort for this: Jango.

Ah…. Jango…. Those were the days… Men were men, women were women, etc. 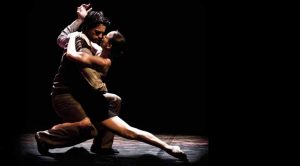 Amir Giles developed Jango as a fusion between Modern Jive in the mid-2000s; here’s a video of him dancing Jango with Catriona Wiles in 2007:

And here’s a review of a 2008 Jango class from a young and naive Tango dancer:

Amir Giles was and is an amazing dancer and  teacher; if he ever decides to return to teaching we’ll snap him up like a shot. He is a Rambert-trained dancer, and he put a lot of effort and discipline into developing Jango as a style. There were badges and everything 🙂

But despite this discipline (arguably more than went into Modern Jive initially), no-one danced it. The Jango freestyles were basically what we’d now call Smooth Jive; lovely dancing by very good dancers, but really just a variant of Modern Jive. People never really adopted the hybrid patterns that were taught in their dancing.

I’ve written elsewhere about my own attempts to fuse these dance forms together, I spent some time working with committed partners to get somewhere with this. Ultimately, the discrepancies between the two styles I outlined in the first post made a true fusion difficult. 99% of tango does not include tension or compression, for example.

That’s not to say you can’t have some overlaps of movements – there’s an MJ move called the Manhattan which is basically a sloppy linear giro, and a media luna is pretty easy to lead using momentum. “Style” is largely “accenting a dance form”, from a certain point of view.

But – for example – it’s near-impossible to lead a Modern Jive follower without any knowledge of a forward ocho into this step, because the conventions of Modern Jive just don’t include the technique required. And the forward ocho is pretty fundamental in tango.

I love both dance forms, but they don’t fuse well; the most you can get is an “accent”.

The general principles I’ve come to is that to develop and a real fusion you need to have:

In the next article, I’ll talk about Blues / Tango – a more succesful fusion,